Dictators, complainers, and faultfinders with brilliant visions may command reluctant crews for a while, but their arrogance, impatience, and condemnation burn out workers before they can 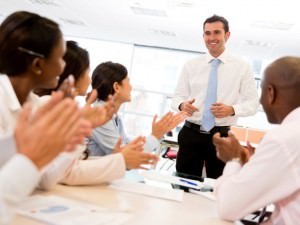 When staffers portray managers, they skip innate characteristics like intelligence, extraverted personalities, and charisma. Instead, they focus on qualities for humility, positivity, and approachability that emotional intelligence can control. Leaders possessing such flairs gain admiration while outperforming their lacking counterparts.

Humility: Arrogance destroys likability quickly. Humble authorities don’t believe they rate above their employees, so they don’t behave as if they’re superior. Rather than flaunting their prestigious status, they view their leadership positions as serving their followers with greater accountability.

Positivity: Respected executives’ positive outlooks are evident in their word choices. Instead of having to make board presentations, optimistic managers get to spread their visions among influencers. Factory tours aren’t obligations. They’re opportunities to connect with product producers. Even when facing truly negative situations, upbeat leaders foresee the future with enthusiastic hope. They exude confidence about helping tomorrow surpass today.

Approachability: Some people spare time for others only when such associations benefit them. But welcoming leaders trust that personnel of all ranks and abilities are worth their attention, despite their hectic schedules. They see personal merits everywhere, so the entire staff feels valuable.

Interpersonal connections: Popular executives make team players feel like they are engaging in personal discussions — even in crowds. Employees feel like the only people around them who count. And at those times, they are. Sympathetic bosses viewing staffers as significant, sensitive, fellow humans converse on very personal and responsive levels.

Composure: Even-keeled directors take their personal achievements and setbacks in stride. They’re not braggarts when succeeding, and mistakes don’t rattle them. Instead, they savor victories without being egotistical and acknowledge failures readily without allowing them to hinder recoveries. Learning from both, they move forward.

Generosity: Insecure bosses who fear full access to job fundamentals might enable employees to outshine them hold back knowledge, resources, and contacts. But confident leaders share those essentials generously so their workers can triumph. They embrace and celebrate the correlation between individual and team successes.

Integrity: Principled managers’ actions instill trust and respect. Instead of just mentioning integrity, their conduct demonstrates it daily. Charming administrators aren’t likable unless strong ethics back up their appealing qualities. 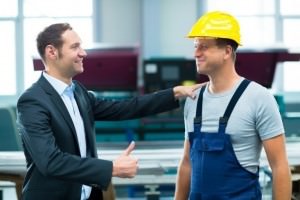 Encouragement: Inspiring authorities go beyond spotting the best assets in employees to making sure they and everyone else involved embrace their gifts. By drawing out staffers’ talents, individuals better themselves and their joint teamwork.

Substance: Deep thinkers realize that their wisdom and proficiency are crucial to their followers’ success. So instead of making shallow small talk, they share their profound expertise with crewmembers regularly. Admired leaders don’t boast about or exaggerate their strengths. That’s unnecessary. They possess true substance, which they impart willingly.

Delegation: Savvy leaders know the merits of delegating. When you partner with National PEO, we can handle numerous back-office duties from human resources and payroll services to workers’ compensation and employee benefits while you guide your firm’s success.

To increase your likability and team’s achievements, address employees with these supportive phrases:

Our aim is: Emphasize bigger pictures so workers will sense greater connections and motivation to contribute to common goals.

Enlighten me: Staffers who believe you value their opinions enthusiastically will strive for professional excellence.

Thanks for your input: Concluding conversations politely and gratefully encourages ongoing feedback.

How can I help?: Showing crewmembers that you care about both job-related and personal matters increases their loyalty.

At your convenience: Acknowledging that productive times vary among workers raises efficiency immensely.

I have faith in your judgment: Besides monetary incentives, trusting staffers’ decisions stimulates higher performance.

Next time, what would work better?: Reduce the stress of mistakes by persuading personnel to find improvement clues in any unfortunate errors.