BULLYING IN THE WORKPLACE

HOW TO KEEP BULLYING OUT OF YOUR WORKPLACE 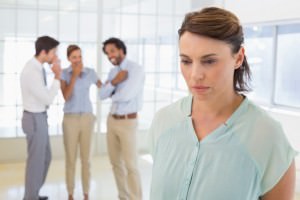 There are several kinds of bullying that can occur in the workplace. Workplace bullying can include sabotaging a co-worker or damaging his or her reputation. It can also include threats, verbal or physical intimidation, insults, browbeating, and assault. In some cases, workplace bullies even hit or kick their targets.

Bullying in the workplace isn’t illegal – yet. But that doesn’t mean your company shouldn’t have a policy in place for dealing with workplace bullies. If you don’t yet have a company anti-bullying policy, create one and make it a part of your employee handbook — it’s the first step toward making your company culture one of courtesy, civility, and respect. Know what constitutes bullying, and don’t be afraid to address any issues right away. It may be necessary to reprimand a workplace bully in some way, especially if the behavior is repeated a second or third time. Keep potential bullies out of your workplace entirely by paying attention to the characters and personalities of job candidates as you interview them.

If you don’t already have an anti-bullying policy in your company, it’s time to create one, especially if you’ve already noticed bullying behavior or one of your employees has complained about being bullied. It’s okay to write an anti-bullying policy even if bullying appears to be a new problem in your organization. A written policy will help you be consistent in your dealings with all future instances of bullying. Make sure there’s a way for bullied employees to come forward without worrying about suffering retaliation at the hands of the bully.

Know What Bullying Is

Some behaviors that can constitute bullying in the workplace include: 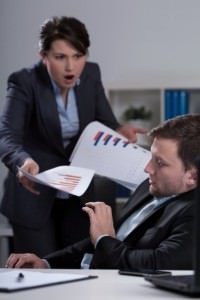 Of course, just because a person interrupts someone during a meeting or has a big mouth doesn’t mean that he or she is a bully. It’s important to remember that bullying lies in the way an employee’s behavior makes others feel. You might see behavior that looks like bullying, only to discover that the employee at whom that bullying was apparently directed saw nothing wrong with it at all. On the other side of the coin, behavior that doesn’t bother one employee might deeply disturb another.

If you’re not sure whether an employee is being bullied, don’t be afraid to ask some open-ended questions like “How are things going?” When employees know that there is an anti-bullying policy in place and that they can lodge complaints without fear of retaliation, they’ll be more likely to open up. Take all bullying complaints seriously; if an employee complains about bullying and you don’t do anything about it, he or she will probably stop complaining, even if the bullying continues or escalates. Instead of lodging fruitless complaints, the bullied employee will most likely look for another job.

The sooner you address bullying, the sooner you can stop the behavior, while minimizing any harm to the bullied person. Take the bully aside and speak with him or her privately, calmly and without being confrontational. Identify specific instances of behavior that were problematic. Say things like “You rolled your eyes and interrupted someone at the meeting,” or “You called someone a fool” instead of making vague pronouncements like “You’re not acting very nice.” Remember to separate the person from the behavior; it’s the behavior you want to change, not the person. But do make it clear that the behavior must stop. If this is the second or third time the person has bullied someone, you may want to take decisive action, like issuing a written warning, sending him or her to anger management counseling, docking his or her pay, or even letting him or her go.

When you hire new employees, it’s important to vet their characters and personalities during the hiring process to make sure you’re not hiring someone who could turn into a bully. Ask your receptionist and other low-level employees to report on how job candidates treated them during any interactions that may have occurred. Check references, and ask if the person has had a history of bullying or having a short temper. Ask the candidate how he or she handled a frustrating experience on the job, and pay attention to whether or not he or she blames others. Don’t be afraid to ask outright if the candidate has ever had problems interacting with other employees. Get written permission from candidates to check prior performance reviews.

For too many Americans, bullying doesn’t end when they grow up and leave school. Workplace bullying remains a serious issue, and it’s up to managers and corporate leaders to stop it.